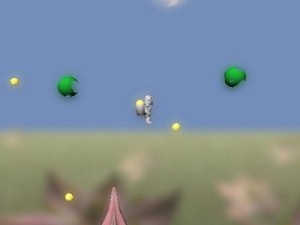 Here is my release of the Pollen Knight, a game made for the Game Prototype Challenge v8. The themes were “Armor” and “Pollination.” I made the game in the span of five days, from Monday to Friday of this week.

In the game, you play as a tiny knight who struggles to collect pollen for the flower that he lives on. The style of the flower retracts like a spring when you press the down button while on top of it. Releasing the button launches the knight into the air to collect the stationary pollen grains. The game is score-driven with a multiplier that increases with every grain grabbed on a single leap. To get the highest score, the player needs to grab every grain on a single jump in each level.

Left and Right direction keys will move the player character, even in mid-air.

The Down direction key presses the plant’s style down when the player character is standing on it. Up is a short jump.

Press R to restart a level.

I'm an independent developer and MFA at the NYU Game Center. I am currently making a few interesting games, such as Against the Wall and Asterisk.